The Highland Society of London and Moniack Mhor Writers’ Centre have today (22 March 2022) announced the Shortlist for the 2021 Highland Book Prize.

This annual award celebrates the finest work that recognises the rich culture, heritage, and landscape of the Scottish Highlands and Islands.  The prize aims to showcase the literary talent of the region and to raise the profile of work created in or about the Highlands.

The four shortlisted titles are all major works in the wider literary field of non-fiction, fiction, and poetry, and are indicative of the quality of literature being produced in the Highlands today.

11 titles were selected for the longlist, out of 71 submitted titles published between January and December 2021, by a reviewing panel of over 180 volunteer readers. The shortlist has now been selected by this year’s judging panel, who are: Kapka Kassabova, poet and writer of fiction and narrative non-fiction, whose book Border (Granta) won the 2017 Highland Book Prize; Jenny Niven, freelance producer and director, and Chair of Literature Alliance Scotland; and Mark Wringe, Senior Lecturer in Gaelic Language and Culture at the University of the Highlands and Islands. Novelist and poet Kevin MacNeil provided an additional Gaelic perspective as a shadow judge, and the selection process was chaired by Alex Ogilvie, a Trustee for the Highland Society of London. 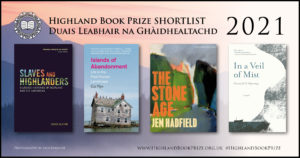 The shortlisted titles are:

Alex Ogilvie, Non-Voting Chair of the Judging Panel, said: ‘Judging a longlist of such high quality was never going to be easy, however the judges had a hugely enjoyable and constructive discussion around each of the titles, which ultimately led to a unanimous decision on the titles that will now go through to the final round.’

Jenny Niven said of Slaves and Highlanders: ‘‘This is a powerful and thought-provoking book that opens a vital conversation on our understanding of the Highlands, both in the past and with implications for the present; and as a result changes our perspective of Scotland as a whole. The depth and meticulousness of the research was incredibly impressive; Alston lets the facts speak for themselves – and they take the breath away.’

Kapka Kassabova said of Islands of Abandonment: ‘Flyn is a brilliantly atmospheric writer who brings out the individual tonality and significance of each of the abandoned worlds she visits. This haunting, courageous, and informative book takes us to places where past and future meet.’

Kapka Kassabova also commented on The Stone Age: ‘In a pantheistic journey of Shetland, Hadfield converses with her environment. The human and more-than-human worlds are perceived to be a seamless whole, and every rock has a voice. This book is a literary, environmental, and spiritual adventure.’

The winning title will be announced at an award ceremony on the 26th May, which will be held in Inverness. One author will be awarded a £1000 prize by the Highland Society of London and will receive a writing retreat the Moniack Mhor, Scotland’s Creative Writing Centre.

About Slaves and Highlanders: Scots were involved in every stage of the slave trade: from captaining slaving ships to auctioning captured Africans in the colonies and hunting down those who escaped from bondage. This book focuses on the Scottish Highlanders who engaged in or benefitted from these crimes against humanity in the Caribbean Islands and Guyana, some reluctantly but many with enthusiasm and without remorse. Their voices are clearly heard in the archives, while in the same sources their victims’ stories are silenced – reduced to numbers and listed as property. David Alston gives voice not only to these Scots but to enslaved Africans and their descendants.

About Islands of Abandonment: This book explores the extraordinary places where humans no longer live – or survive in tiny, precarious numbers – to give us a possible glimpse of what happens when mankind’s impact on nature is forced to stop. From Tanzanian mountains to the volcanic Caribbean, the forbidden areas of France to the mining regions of Scotland, Flyn brings together some of the most desolate, eerie, ravaged and polluted areas in the world – and shows how, against all odds, they offer our best opportunities for environmental recovery.

About The Stone Age: Jen Hadfield’s collection is an astonished beholding of the wild landscape of her Shetland home, a tale of hard-won speech, and the balm of the silence it rides upon. The Stone Age builds steadily to a powerful and visionary panpsychism: in Hadfield’s telling, everything – gate and wall, flower and rain, shore and sea, the standing stones whose presences charge the land – has a living consciousness, one which can be engaged with as a personal encounter.

The Stone Age is a timely reminder that our neurodiversity is a gift: we do not all see the world the world in the same way, and Hadfield’s lyric line and unashamedly high-stakes wordplay provide nothing less than a portal into a different kind of being. The Stone Age is the work of a singular artist at the height of her powers – one which dramatically extends and enriches the range of our shared experience.

About In a Veil of Mist: Operation Cauldron, 1952: Top-secret germ warfare experiments on monkeys and guinea pigs are taking place aboard a vessel moored off the Isle of Lewis. Local villagers Jessie and Duncan encounter strange sights on the deserted beach nearby and suspect the worst. And one government scientist wrestles with his own inner anguish over the testing, even if he believes extreme deterrent weapons are justified. When a noxious cloud of plague bacteria is released into the path of a passing trawler, disaster threatens. Will a deadly pandemic be inevitable?

A haunting exploration of the costs and fallout of warmongering, Donald S Murray follows his prize-winning first novel with an equally moving exploration of another little-known incident in the Outer Hebridean island where he grew up.