Huge congratulations to Alan Spence, who was appointed the new Edinburgh Makar this week. 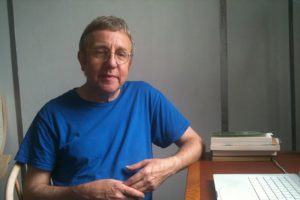 Alan Spence is a highly respected poet, playwright, and novelist, who lives in Edinburgh but was born in Glasgow. He taught creative writing at the University of Aberdeen for nearly 20 years, and his writing spans many genres and themes, often falling somewhere between literature and philosophy with poetry inspired by Zen and meditation. His writing covers many forms including haiku and tanka, often in collaboration with artists such as Elizabeth Blackadder and Alison Watt. His most recent novel is Night Boat, published by Canongate, and is based on the life of Zen master Hakuin.

He said: “I am delighted and honoured to be nominated as the fifth Edinburgh Makar, the Poet Laureate for this wonderful city that has been my home for over 40 years.

“I look forward to following in the footsteps of my illustrious predecessors, Stewart Conn, Valerie Gillies, Ron Butlin and Christine De Luca. I know them all and they’re fine poets who have done a great job. We live in troubled times and poetry has never been so important.”

The outgoing Edinburgh Makar, Christine De Luca said: “I am delighted that Alan Spence is to be our next Makar.  Besides being a wonderful writer, he is out-going and generous-hearted.  I’m sure he’ll take the role in fascinating new directions.

“I have thoroughly enjoyed my time as the Edinburgh Makar and found nothing but support from the Council and its staff and from the other organisations supporting the role. Local poets too have been hugely encouraging and have willingly taken part in a range of projects.”

A history of Edinburgh Makars: