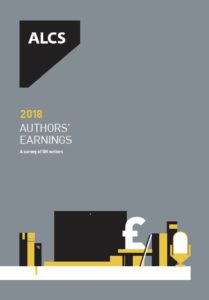 The earnings of writers in the UK continue to fall, new research commissioned by ALCS reveals. The median earnings of professional writers – that is those who dedicate over half their working hours to writing – has fallen by 42% in real terms since 2005 and by 15% since 2013.

The ALCS research, Authors’ Earnings 2018: A survey of UK writers, found that the median annual income of a professional writer now stands at under £10,500. In 2017 the Joseph Rowntree Foundation’s Minimum Income Standard (MIS), the income level considered to be a socially acceptable standard of living for a single person, was £17,900.

The current minimum wage in the UK for those over 25 is £7.83. Based on a standard 35-hour week, the median hourly earnings of a professional writer are just £5.73.

At £3,000 a year, the typical median earnings of “all writers” – which includes occasional and part-time writers in addition to professional writers as defined above – are also declining steeply, falling in real terms by 49% since 2005 and 33% since 2013. 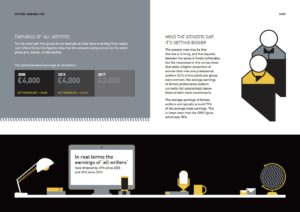 Steep decline in full-time writers since 2005

In 2005, 40% of professional writers earned their income solely from writing. In 2017, that figure had fallen to 13.7%. This reflects the fact that due to their declining earnings, the majority of professional writers now need to have “portfolio” careers, supplementing their writing income with other activities such as teaching. Whilst the incomes of all writers continue to fall, the creative industries in the UK – now valued at £92 billion – are growing at twice the rate of the UK economy as a whole, calling urgently into question the extent to which writers’ significant contribution to those industries is properly valued.

Over 5,500 writers working in a wide range of fields responded to the ALCS survey which was carried out by CREATe; that is more than double the number of respondents who participated in ALCS’s previous research into author earnings in 2013, and a higher number than the combined total of those who participated in 2005 and 2013. More detailed findings from the research will be published later in 2018.

“The results of this third ALCS survey into author earnings confirm what most writers know only too well – that incomes continue to decline, and that it is harder than ever to make a living as a professional writer. Given the enormous contribution that the work of UK writers makes to the success of our world-leading creative industries, the ALCS research calls starkly into question the extent to which we value that work. Without writers, our country and our culture would be poorer in every imaginable way and so we must ensure that we give writers as favourable an environment in which to make a living as possible”.

The authors’ earnings findings booklet can be found here.