Chitra Ramaswamy – On A Lifetime of Ticking Boxes

Let me tell you a story. It begins not once upon a time but a few years ago. Months after this riven old island voted to leave the European Union by the narrowest of margins. Days after an ex-reality TV host became the leader of the free world on the other side of the Atlantic. The world is reeling. This sense of not knowing what to do, of all that was solid melting into air, of being spectators of history watching open-mouthed from the sidelines, will not stop.

In this moment a writer happens to win an award, right here in Scotland. It is a time in which the times must be acknowledged and in her speech she thanks this country that has been her home for half her life. She thanks it for valuing her book, for valuing her at this historic moment in time. And she means it. This validation means the world to her. It comes from this country, Scotland, which is not exactly hers but in which she has settled, though this is not a word she settles into easily. This country, in which she has produced a mixed-race baby and a similarly hybrid book. (The first was much harder.) In which she has become a writer, and that is all she ever wanted to be. And in which there happens to be another baby quietly getting started in her womb, even as she is standing there on stage thinking she feels sick because she is nervous, not realising that this secret is so primordial it hasn’t even been revealed to her yet.

Afterwards she is whisked away for photos, handshakes, congratulations, the heady stuff of success. Only the following day does she discover what else happened that night. Following her speech, the head of the organisation returned to the stage and made an off-the-cuff comment about this award really ticking all the boxes. It was nothing really, just a light-hearted joke, more at the expense of funders and their infuriating rules than the writer who, did I forget to mention, happens to be Indian, English, bisexual, a woman, the daughter of first-generation immigrants, a mother, and somehow, against all the odds, a writer. The comment is nothing special. It is in fact about as standard as organisations headed up by straight, white, middle-class men. And it is certainly not intended to cause offence. It is well-meant, perhaps even an attempt to celebrate the differences that are elsewhere, beyond the warm and welcoming world of literature, threatening to tear us apart. The only unusual aspect of all this is that the following day the head of the organisation issues a heartfelt apology to the writer. She accepts it unreservedly, touched and a bit embarrassed. She thinks perhaps things are changing. No one has ever apologised before.

But, in the quiet place of things unsaid, she also feels this. Humiliated, because there she was foolishly thinking she had won a prize for writing a good book. She feels like an imposter, because what if ticking boxes is why she won? Ashamed, because those boxes have stalked her for much of her life. She has history with those boxes, and much of it is not happy. She feels like she doesn’t deserve to be here on merit. She feels like an outsider, which she is, but in this moment it is less a badge of honour and more like old-fashioned swallow-me-up stigma. The shine has been taken off her success. She feels like an idiot for even caring. Still, she doesn’t want to appear overly sensitive, humourless, or ungrateful. So just like all the other times she says nothing. Nods along when people tell her that it didn’t mean anything. Keeps on writing.

This should not be the end of the story. My story. It should be the beginning; the necessarily uncomfortable place from which discussions about diversity and inclusion spring. What happens when we reduce the genuine pursuit of diversity to a box-ticking exercise is what happened to me. It is unremarkable. It’s what happens, to me and many others, in all sorts of subtle and unspoken ways, all the time. When did you last hear someone complaining that diversity is all well and good in principle but it is quality that matters most? What did you say?

It is no surprise that in an era in which false equivalence and doublethink reigns, the very meaning of this word has been wrested from our hands and reshaped into some hollow liberal posture. So for the Lionel Shrivers of the world, publishers who commit to diversity are not committed to enriching, enlivening, and prising open the culture. They are merely “drunk on virtue”. Or consider those gatekeepers closer to home who claim that it is an unrealistic expectation to impose BAME diversity targets “in a country whose ethnic profile is at best patchy and in some cases negligible”. Who argue that the “pre-eminent consideration for anyone pulling the strings is quality and originality”.

These arguments should be deeply offensive to anyone in the business of words, not just those of us whose profile is deemed to be patchy or negligible. They not only presuppose that equality and quality are mutually exclusive, but that diversity is actually dangerous. Why? Because it results in a diluting rather than sparking of excellence. It means that those of us who fall under diversity’s wide umbrella have been held back, not because of discrimination and prejudice, a narrowness of perspective that tends to accompany privilege, or a lack of representation, but because we are not as good. Or conversely, if we happen to have made our way, it is because allowances were made, quotas met, liberal consciences assuaged, but never, god forbid, did we get here on merit alone.

The truth, which should be self-evident after more than five thousand years of publishing, is that greatness, just like mediocrity, can come from anywhere. Diversity is not the enemy of quality. It is the realisation of it. Right now, diversity is something that is said more than done; all talk and no action. It has become a dubiously fashionable word that triggers a kind of cynical switch-off in our minds, a slump in our bodies, and a pile-on in our social media feeds. We appear to be more interested in debating what constitutes diversity than actually increasing it. Meanwhile our publishing companies, literary organisations, and funding bodies – those in the business, lest we forget, of showing the world not just what exists but what is possible – bumble along much as they were. I will not waste my precious words here nor my hard-won seat at this table by laying out the proof that we are not there yet. I think we can all agree that our industry, like any other, is woefully lacking in diversity. I think we can all agree with what Chimamanda Ngozi Adichie famously called “the danger of a single story”. And I think most of us can agree that we would like to do better.

These are early days. Scotland only held its first-ever conference promoting diversity in the creative arts in 2016. It is as recent as this very summer of 2019 that ROAR, a group working to combat inequality in Scottish writing and publishing, shared its first research findings. Which, of course, reveal that gender inequality in the sector is structural and persistent. It was ever thus. The attention is new but the problems are as old as humanity. There is a long way to go, but we should take comfort, especially being as we are in this glorious and generous business of words, that the way to get there is the way to get anywhere worth going. By listening to other people’s stories. 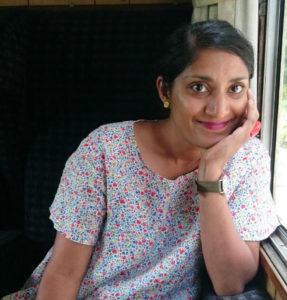 Chitra Ramaswamy is an award-winning journalist and author. Her first book, Expecting: The Inner Life of Pregnancy, was published by Saraband in April 2016. It won the Saltire First Book of the Year Award and was shortlisted for the Polari Prize. She has essays in Nasty Women, The Freedom Papers, and The Bi:ble, and was one of the writers who contributed to Edinburgh’s Message From The Skies project. She writes mainly for The Guardian, is a columnist for the National Trust for Scotland and Holyrood magazines, and broadcasts regularly for BBC Radio Scotland. She lives in Edinburgh with her partner, two young children and rescue dog and is currently working on her second book.