This Is It! Literary Cabaret 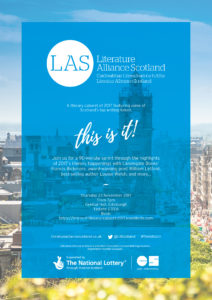 This pilot literature showcase event aimed to champion the health of the literary nation – by celebrating its success – while inspiring support to address the challenges to key audiences including policymakers, the media and the public.

The name of the event comes from the title of William Letford’s poem This Is It, sourced with the help of the Scottish Poetry Library. The poem is written in Scots and we used three lines (with permission from the poet and his publisher Carcanet) which we felt summed up the excitement and possibility of literature in Scotland:

this is it, this is

where the hammer hits the stane an sparks

The lines featured on our venue branding and our goody bag with a Gaelic translation, courtesy of The Gaelic Books Council, who also provided a Gaelic translation of our programme and ensured the event included a reference to the languages of Scotland.

Results from our post-event survey (of 37 respondents) showed that the majority (70%) live in Edinburgh and work in literature or publishing (80%) and are female (68%). Interestingly, 17% of respondents did not work in the arts.

Attracting big names in the literature sector helped create a buzz from our promotional Twitter activity on Twitter in the run-up to and on the night of the event with speakers helping through Retweets and Likes.

The top tweet on the morning of the event earned 13.5k impressions and 267 engagements while Colin Fraser’s live tweeting on the night earned 21,740 impressions for 40 tweets.

Survey respondents cited celebrating the sector (without prompting) as a positive in the survey responses: ‘the variety of speakers, and the general literary enthusiasm surrounding the whole event’; ‘the positive stories being told about literature in Scotland, bringing people together to be inspired and enthused.’

Marketing and promotion included Twitter, A4 posters and leaflets distributed in Edinburgh, Dundee, Inverness, Stirling and Glasgow as well as listings, and adverts in the Scottish Review of Books and The List.

Our members were instrumental in spreading the information about the event to their networks via Twitter and newsletters and word of mouth.

The event was also filmed and the individual talks have been shared on our LAS YouTube channel providing a tangible legacy and benchmark for 2017.

We enlisted the support of four volunteers from PublishED, the Edinburgh University Association for aspiring young writers, publishers and editors, whose help was invaluable.

Networking, the people, and catching up on what’s happening in the sector were cited as some of the ‘best things about the event’ from survey respondents.

Speakers and the venue were rated highly as ‘very good’. Jenni Steele of VisitScotland was keen to quote Louise Welsh’s talk for future VisitScotland campaigns.

Delivering this big event has helped to identify the elements that work well and those that can be improved or done differently.

Importantly, there is clear demand for the three event aims of advocacy, networking and celebration, but delivered in different formats and at different times of year. 70% of respondents said they would attend again next time.

Collating statistics and key facts that demonstrate the sector’s value to share at the event was a challenge. There is a clear need to plug the gap in hard-hitting quantitative sector statistics with commissioned research.

This challenge was overcome for the event thanks to our good working relationship with Creative Scotland. Through them we were able to access some of the excellent qualitative statistics on literacy and health and wellbeing included in the Creative Industries Sector Briefing.

One of the survey respondents summed up the event as follows: “it was a great experiment. I hope it continues.”