We’re delighted that our friend and member Joy Hendry, Editor of Chapman is honoured in this year’s ‘Outstanding Women of Scotland’, which saw ten women from the fields of the arts, culture, politics, activism and science honoured and inducted into the esteemed Saltire Society ‘Outstanding Women of Scotland’ community at a special event as part of the Women of the World, Perth.

Joy Hendry said: “This is a huge honour. I came through an educational system which would have you believe that Scotland has no great literature. I learned from my contemporary writers that we were cheated from our birthright. I used a small magazine to help put that right.

“I am honoured to be here and hope to spend the rest of my life living up to the honour.” 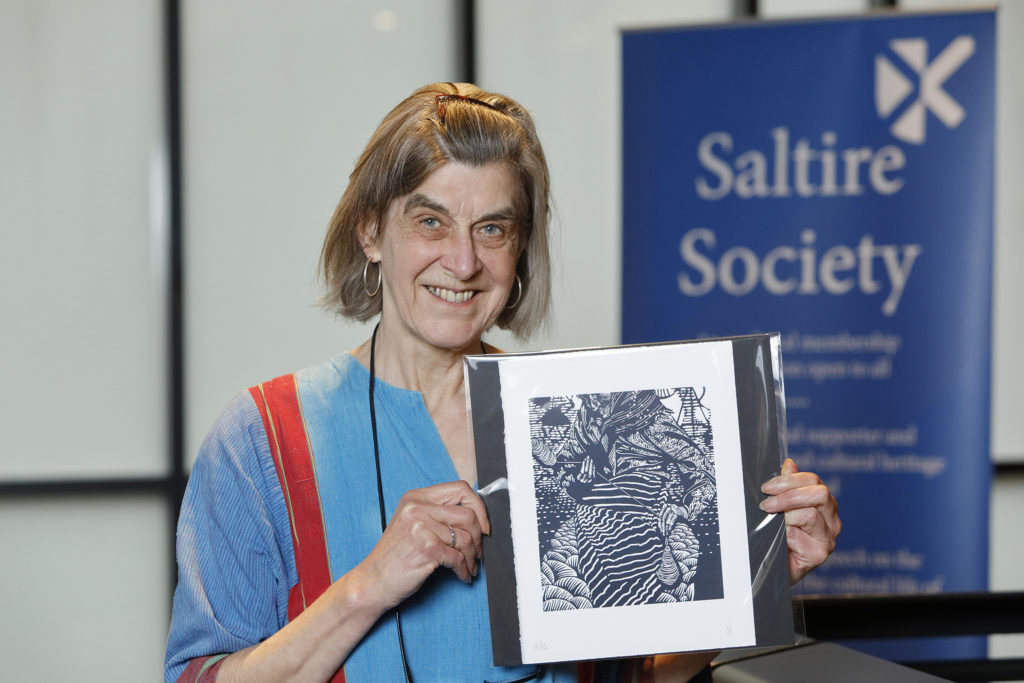 Since it began in 2015, the ‘Outstanding Women of Scotland’ induction has recognised and celebrated Scottish women from all walks of life and the inspiration their achievements set for the next generation. Each year, the campaign invites members of the public to nominate living contemporary examples of Scottish women who have made a significant contribution to Scottish culture and society for induction into the Outstanding Women of Scotland community. Past inductees have included singer-songwriter and activist Annie Lennox, bestselling author J.K. Rowling and First Minister Nicola Sturgeon. 2020 is planned to be the year that Saltire brings together its 40 inductees in a mentoring strategy to support and further inspire Scotland’s young people.

Taking place as part of the Women of the World Perth celebration, the special ceremony saw each inductee with a limited edition print from artist and illustrator Natasha Russell https://www.natasharussell.com/

We are excited to be building the Outstanding Women of Scotland community again in 2019 and having the opportunity to celebrate these amazing women and the work they do to make Scotland and further afield a better place to live, work and play.  Without these women, Scotland would be a darker place and we are privileged to be able to take this moment to celebrate and thank them.

As well as recognising these women for their contribution, the Outstanding Women of Scotland Community is creating a tangible list of women who can, will and do inspire generations to come.