The Board of Trustees of Literature Alliance Scotland (LAS) is delighted to announce the appointment of Jenny Niven as its new Chair.

The appointment was unanimously approved by the LAS Board following an open recruitment process and Ms Niven will begin her three-year term in the role from the beginning of August 2021.

Jenny Niven said: “I am delighted and honoured to be taking up the role of Chair of Literature Alliance Scotland. Scottish literature and languages is full of talent and expertise, both in terms of individual writers, practitioners and producers, but also in the numerous internationally recognised organisations and institutions who all sit round the LAS table. I’m looking forward to working with so many respected friends and colleagues and to playing a role in championing our collective voice, while working to understand the needs of Scotland’s writers and organisations as we rebuild post-Covid.

“We’re in interesting times, to say the least, and we need strong representation for the role of the arts across society and the vital contribution made by writers and professionals in the sector. Literature has always played an exciting role in how we tell our stories and there are lots of possibilities and challenges ahead, from Scotland’s Year of Stories to harnessing digital to showcase and promote Scottish writing in a new era internationally. With LAS’ recent brilliant work in recognising the diversity of writing in Scotland and creating real talent development platforms, there is plenty to do; I feel privileged to be entrusted to get started and to play a part in our collective rebuilding effort at this crucial time.” 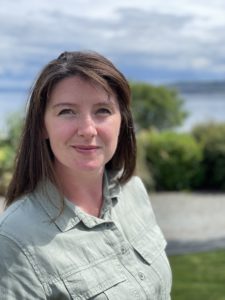 Jenny Niven is a highly regarded and well-known figure operating within the literature, languages and publishing sector. As a freelance producer and director, she is the director of Push the Boat Out, a new festival of poetry, spoken word and hip hop, which launches for the first time in Edinburgh in October 2021. She is also Executive Producer at the Edinburgh International Culture Summit Foundation and a sought-after chair for literature events, having interviewed a wealth of leading authors worldwide.

In 2016, Jenny led the Edinburgh International Book Festival organisation on secondment as Acting Director over the winter months of 16/17, winning the festival a Herald Angel Award for the ground-breaking ‘Outriders’ program.

Jenny has worked internationally, as Associate Director at the Wheeler Centre for Books Writing and Ideas, Program Manager at the Melbourne Writers Festival and inaugural Director of The Bookworm International Literary Festival, in Beijing, China. She was also on the founding Board of the Stella Prize for Australian Women’s Writing and has judged a range of literary prizes.

Out-going Chair Peggy Hughes has been in the role since May 2017, leading the development of LAS to where it is now recognised as a vital connector between the organisations in the literature, languages and publishing ecosystem.

During her four-year term, Peggy has overseen the creation of a “life changing” career development programme, a series of challenging writer commissions, a new Writers’ Advisory Group and a host of professional development and networking opportunities for members and the wider sector at LAS meetings and events. Not to mention pivoting the programme to online and advocating for the sector throughout the pandemic.

Peggy Hughes, who will stand down as a Trustee at the AGM in the Autumn, said: “Scotland’s ecosystem of literature and languages is a rich, breathing, inspiring place to be, and it’s been my honour and pleasure to chair this network of organisations and practitioners working with and for it. The past 18 months have brought huge challenges and changes to the literature and creative sectors at large, but the Literature Alliance Scotland network has shown that innovation, imagination, resilience and collaboration can help us navigate the stormiest waters.

“Collectively, our priority is to ensure that our brilliant writers and readers, librarians and teachers, play makers and festival builders remain connected, that their work is amplified, that they are able to lean on and learn from each other, and Jenny Niven is a superlative Chair for the times we’re in, and for a network which creates the conditions ‘where the hammer hits the stane an sparks / ur made’ (as William Letford has it in his poem ‘This Is It’). I look forward very much to the next chapter of the story of this brilliant network under her leadership.”