CILIP in Scotland is running a new campaign – Libraries Matter – in the lead up to the local government election in May – and needs your help!
The campaign focuses on school and public libraries and involves two main activities – contacting those standing for election and asking them to support libraries if elected and also raising the profile of the campaign’s key messages via the press and social media.
To join in with the campaign and spread the word that Libraries Matter you can:
1. Share the campaign details and link with any wider networks you have: http://www.cilips.org.uk/advocacy-campaigns/campaigns/libraries-matter/
2. Provide a quote for CILIPS’ campaign support page (these can be provided by organisations or by individuals): http://www.cilips.org.uk/advocacy-campaigns/campaigns/libraries-matter/libraries-matter-campaign-support/
3. Post a picture of yourself, your staff and/or members of the public you may work with holding a ‘#LibrariesMatter’ sign (download from CILIPS’ website here) and post them on Twitter or Instagram with the #LibrariesMatter hashtag. 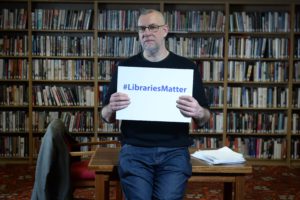