‘What was the good of moving when a person could travel so wonderfully sitting in a chair?’

When travel has been declared the greatest of public enemies, what can a traveller do, or for that matter, a travel writer? We’ve become accustomed, this year, to unique limitations on our freedom – at times unable to leave our countries, or our cities, even our homes. One response has been to fall back on hopes or memories, another has been to reach for the bookshelves; some have done all three. Travel is, has always been, about more than the physical – as much about imagination as translocation.

I remember arriving late to a Greek island in winter, the steel gangway dropping with a reverberating clang, before inching my motorcycle out into a night as black and turbid as olive juice. I couldn’t see the island, yet its atmosphere was already charged with all I’d ever read or imagined about Greece.  There was the gentlest tang of citrus in the air, mingled with wafts of diesel; and carried with me was all was the imaginative freight of a lifetime’s reading, from The Odyssey to Captain Corelli’s Mandolin, from John Fowles’ The Magus to Anne Michaels’s Fugitive Pieces. The Greek island of Fowles’s novel was a theatre of surreal magic, a liminal place of menace and seduction, while Michaels’s island was a refuge from the horror of war.  As I drove tentatively through the unfamiliar port, and out into the darkness, the land around me held all those things and more.  Michaels wrote of Zakynthos in winter that  it ‘juts like a bone from the skin of sea,’ and of her characters, that they ‘lived close to the sky.’ As I searched in the dark for a place to pitch my tent, I felt that kinship with sea and sky refracted through her words. Fiction had enriched my experience, and made it paradoxically more authentic.

When I came to write a book about the allure of islands I knew it would have to be filled with maps – not only because they are beautiful as objects, or historically interesting (both true), but because they’d allow the reader to indulge the imagination, and mentally take a walk around a place they’d be able to visualise on the page as the words, sentences and paragraphs about it passed into their minds’ eye. The book would make reference to my own island journeys across seven continents and thirty years of travel, but my intention was to offer bibliophiles, cartophiles, and isle-o-philes the literary space to imagine island journeys of their own.

This winter all of us are going to be falling back on memories of travels we’ve done in the past, as well as planning and imagining those we’ll be able to do in the future once the nightmare of this pandemic has passed – as it will. And the great boon of this kind of travel is that there’s no budget involved. Go with Robert Louis Stevenson to find peace in Samoa, where he rhapsodised about the ‘delight of weeding out here alone by the garrulous water, under the silence of the high wood, broken by the incongruous sounds of birds.’ Or travel with Virginia Woolf to her lighthouse on Skye (inspired by the light of Godrevy Island off the Cornish coast), where she spells out the way that her protagonist family, the Ramsays, sought out islands as catalysts of transformation, as testing grounds of maturation.

I’ve always loved Borges’s description of the ocean as ‘violent and ancient’ – it captures perfectly the power and drama of watching winter storms on the sea along the Firth of Forth where I live, and in the islands of Orkney where I work sometimes as a GP. And it captures just as perfectly those I’ve imagined from my armchair, as I’ve spanned the Atlantic three times with Joshua Slocum, as he sought refuge from the heaving ocean from the Azores to Australia and all the way back to Ascension Island westwards around the globe. His experience of such solitude, sailing alone around the world, stands as a reassurance, even an invitation, not to be afraid.

Throughout my adult life I’ve considered books as convenient islands that can be carried in the pocket, because of their capacity to grant a voluntary, temporary isolation from one’s surroundings, a relief from immediate demands, and a space for contemplation. In his novel Vertigo, WG Sebald wrote of precisely this ability of literature to transport: ‘I take refuge in prose as one might in a boat . . . I cross over to an island, and every time, the moment I read the first sentences, it is as if I were rowing far out on the water.’  It’s a power that, given luck and enough opportunity, we learn in childhood – perhaps my first experience of literary escapism was C.S. Lewis’s Narnia series, sailing with the Pevensie children on the Dawn Treader to the Eastern Islands. In an inversion of the cultural association between islands and treasure, those travellers encounter an island pool that poisons anything coming into contact with its waters into a deadly gold. On another of Lewis’s islands there’s a dragon cave: ‘Most of us know what we should expect to find in a dragon’s lair,’ writes Lewis, ‘but Eustace had read only the wrong books’.

Bookish island escapes have a tradition at least as long as The Odyssey, and the golden thread of their influence runs through the wonder-voyages, or Immrama, of medieval monks like St Brendan, through the Norse sagas, to the likes of Thomas More’s Utopia. ‘A map of the world that does not include Utopia is not even worth glancing at,’ wrote Oscar Wilde, ‘for it leaves out the one country at which Humanity is always landing. And when Humanity lands there, it looks out, and, seeing a better country, sets sail.’  The genre has developed since the days of Swiss Family Robinson and Treasure Island – it’s there in Ursula le Guin’s Earthsea books, and in George R.R. Martin’s Game of Thrones – but has never yet managed to shake off the impact of Robinson Crusoe, perhaps the Ur-text of literary island escapism. Virginia Woolf implied that the influence of Crusoe – still seen in broadcast programmes as diverse as Desert Island Discs and Love Island – is thanks to the fantasy of simplicity that such broadcasting offers: she wrote of Defoe’s book: To dig, to bake, to plant, to build – how serious these simple occupations are. Hatchets, scissors, logs, axes – how beautiful these simple objects are. But grappling with that same influence, Elizabeth Bishop’s poem Crusoe in England laments:

But my poor old island’s still

None of the books has ever got it right.

In 1765 the philosopher Jean-Jacques Rousseau was obliged to retreat to a lake island in Switzerland. Late summer was shading into autumn; he expected boredom but was surprised instead to find in his isolation a source of great happiness. He had few books, plenty of leisure and the company of only a couple of others – much like the situation many of us are going to face this lockdown winter. Rousseau used an Italian phrase to describe the satisfaction of his situation: there was a pleasure in far niente – ‘doing nothing’ – a pleasure rendered possible through what might at first have seemed an undesirable isolation. Being stuck on an island curtailed Rousseau’s possibility of engaging with others, but the corollary opportunities for rest, for contemplation, and for the imagination, were all the more nourishing as a result.

This winter, despite the restrictions, I’ll be travelling as far as ever before. My walks might be limited to the Firth of Forth, but my journeys will be limited only by the possibilities of my bookshelves. I’ll think on journeys past as well as on the possibilities of the future. When this is over, travel will feel all the sweeter for having been so long denied. Rousseau would have preferred to stay forever in his island isolation, but the powers that be wouldn’t allow it: ‘I know men will be careful not to give me back such a sweet refuge when they did not want to leave me there, he wrote of his time on the island. ‘But at least they will not prevent me from transporting myself there each day on the wings of my imagination.’ Though this year we’ve all had to let our minds do the travelling, I’ve been grateful for the literary reminders that journeys of the imagination have always been the best kind. 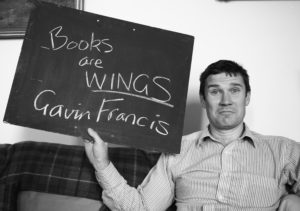 Gavin Francis qualified in medicine from Edinburgh in 1999, then spent ten years travelling, visiting all seven continents.  He is the author of six books of non-fiction. True North, Travels in Arctic Europe (2008); Empire Antarctica: Ice, Silence & Emperor Penguins (2012) which was SMIT Scottish Book of the Year 2013 and shortlisted for the Costa, Ondaatje, Banff, & Saltire Prizes; Adventures in Human Being (2015), which won Saltire Non-Fiction Book of the Year 2015, was the Observer’s Science Book of the Year, and was a winner in the BMA Book Awards; and Shapeshifters: On Medicine & Human Change (2018), which was a book of the year in the Sunday Times and the Scotsman.  Island Dreams – Mapping an Obsession (2020) was shortlisted for Waterstones Book of the Year; Intensive Care: a GP, a Community, & Covid-19 will be published in January 2021. His books have been translated into 18 languages. He is a Fellow of the Royal College of Physicians of Edinburgh, and a Fellow of the Royal College of General Practitioners. He lives in Edinburgh, where he also works as a GP.