‘I wonder how you’d feel about reworking the language of the book.’

‘The use of dialect will make it difficult to connect with a mainstream audience.’

‘Struggled with the language, asked to see the dialled-back dialect version.’

‘It would make sense if the voice in his head is slightly more standard than the version that comes out in dialogue.’

‘I remember being impressed with the writing … but worrying if any publisher would take it on.’

‘Made for a difficult reading experience.’

‘Graeme might want to consider editing the use of accent/dialect?

‘You could also possibly keep the full dialect effect in dialogue.’

‘Mainly, I do find voice novels of all kinds difficult, so the barrier for me was always going to be higher than for other editors – to me, however good the voice is, the storytelling can suffer, and I did find this to be the case here.’

‘I have trouble with novels in dialect, sorry.’

The demanded conformity n policin ae Scottish vernacular dialect begins in childhood. It’s not aye, it’s yes. It’s not naw, it’s no. Ewes (Yooz) are female sheep. Scottish parents know instinctively that if their child speaks in the dialect ae their working class community it wull hold them back in later life. Love forces the correction. Standard English is ma second language. It’s that other higher status language, the wan ma maw telt me tae use in job interviews tae create the right impression. Expectin artists tae forgo their daily language n write their truth in a foreign Standard English is a different thing entirely. It isnae an act ae love. It soon became clear that ma language wis an unwelcome deviation. The un-standard English: the strange, the foreign, the niche, the difficult, the incorrect, the unfit.

An English tutor in the Scottish prison system messaged recently tae say her class hud been studying ‘The Young Team’. Soon as they wur told they wur doin a literary study, they wurnae interested. She told them the title, hopin it wid strike a chord. Maybe unsurprisingly, their reluctance didnae disappear. They agreed it would probably be a lot ae shite n ‘cheesy’ n written by a ‘tourist’ who hud never experienced the life they lived as young men. ‘They’re not confident in Standard English,’ she tells us. ‘They assume it’s not for them and it will be flowery language… It [dialect] was less overwhelming for them.’ Wan ae the most sceptical said after readin, ‘Yi know wit? A found that book very inspirational … A’m gonnae write ma ain book.’ Sometimes it wis read in full n others, it wis broken intae digestible constituent parts tae examine relevant social themes. Other copies wur passed between prisoners in the halls ootwith the classroom environment. Dialect tae them wisnae just desirable, it wis essential fur access. Literature written in the common tongue hus a powerful capacity tae connect wae the excluded.

‘My culture and my language have the right to exist, and no one has the authority to dismiss that.’
~ James Kelman

Back tae back wae tenner shots

We’re the soldiers ae the night

Wur always on the go,

Because it’s aw we fuckin know

Wi looked towards the stars,

A’d be stuck behind these bars

A poem by a Scottish prisoner as a response tae ‘The Young Team’. Shared gratefully wae thanks.

You can also listen to Graeme reading his incredible piece below. Please note: this audio content contains strong language. 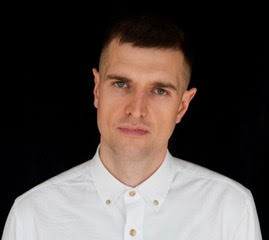 Graeme Armstrong is an author from Airdrie, North Lanarkshire. His teenage years were spent within Scotland’s violent ‘young team’ gang culture. Graeme’s life changed when he was inspired to study English literature after reading Trainspotting at just sixteen. He was written-off and told to leave school without qualifications but defied expectation to read English as an undergraduate at the University of Stirling. After graduating with honours, he took a Master’s in Creative Writing – where he would be mentored by Janice Galloway.

Described by poet Kathleen Jamie in university as ‘bilingual’ – Graeme writes in and champions the use of Scottish west-coast vernacular dialect, following a rich heritage of Scottish working-class artists such as James Kelman, Tom Leonard and Irvine Welsh.

His debut novel, The Young Team, was published by Picador in 2020.

It became a Times bestseller.