Jenni Fagan – There are Three Suns in the Sky

We are at a pivotal moment in the history of Earth. Greenhouses gases have not been as high as current levels — for three million years. Industry, deforestation and massive agriculture industries have caused this. Humans have caused this. Life is difficult. We are living on a dying planet. We are what is killing it.

What are we doing?

In my novel The Sunlight Pilgrims, we arrive in a small remote caravan community in Scotland at the tip of what appears to be a global ice-age brought about by climate change. An iceberg bigger than Wishbone Hotel has drifted into shore. There are three suns in the sky. A phenomenon called parhelia when a central sun is reflected by ice crystals in the air. There are frost flowers, and peaks of penitents (tall snow peaks that look like humans) are marching across the mountains in thousands. All across Europe, people are trying to migrate to a safety that does not appear to exist anymore. Corpses are being found in the street. A young mother called Constance is hunkering down to bring up her daughter (recently open in her transition) in what appears to be the end of times. Her new neighbour Dylan has arrived from London after losing his business and family home in the great social unrest of our times. He is a Nephilim. Son of a human and a fallen angel, a man taller than any should be. He falls in love with Constance on the first night when he finds her polishing the moon, barefoot, in the snow, sleepwalking. Why is she polishing the moon? Why would she not be? Is there anything more beautiful on a clear night? Why are scientists trying to repair our reefs and create solutions to climate change? They are doing so because there is no more important thing to tackle on Earth right now than saving the planet and each other. Humanity has grown rapidly, our populations are bigger than they have ever been, all of the structures are under pressure, religion, patriarchy, capitalism — are all contributing in their rigidity when they should all be standing up together and changing everything.

We could be the current generations living on Earth do that.

Human life is short and this planet does not belong to us — we are just allowed to be here for a tiny heartbeat of time in the journey of Earth. She is not our planet. The universe and solar systems were here long before us and if we kill ourselves they will still be here.

If we can’t care for the planet we live on and each other, then what right do we have to a future?

Stephen Hawking once said that the greatest threat to humanity is stupidity followed by climate change.

We are not doing well on either front right now.

This world is full of brilliant, wonderful, strong, caring people who want to make the absolute most of what this life has to offer and what legacy they can leave behind and at every corner we seem thwarted by corruption, greed, systems that project themselves as so powerful and unchangeable that it demoralises us all.

I love this planet. It is in its own wild nature the most beautiful place we could hope to live. We have every single thing we need to care for it, to sustain food, education and healthcare for all of its residents.

So why are we in this position? Why are we allowing it to continue?

To create the kind of change that we are capable of takes hope, it takes tenacity and it takes imagination. We have to imagine a planet that is not run the way it is. We have to imagine a world in which each individual has access to food, healthcare and education. We have to imagine a world where safety and respect are the rights afforded to all women, children, men and animals as the absolute epitome of our evolutionary potential. Nobody should live without safety or under the duress of fear and abuse. The narcissism of nations run like cults is killing us all. This is a global suicide spearheaded by rich corporations who believe they are immortal. The institutionalisation of those in power to think they have any even vague right — to put their desire for money — over the health and wellbeing of billions — over the entire animal kingdom — over the fundamental core miracle of Earth being here at all!

We live on a planet and planets by their nature are unpredictable, but if we cannot embrace the very best of what we have in being here then there is genuinely no hope.

We can change this.

It’s the only job we are really here to do.

My character Stella is 12 years old in The Sunlight Pilgrims and she wants the entire human race to draw up a contract for life on Earth that each human will adhere to. The first of those tenets would be that we are here as caretakers of the planet first and foremost. This world does not belong to us. It never did. We are here to care for it. Not to kill it. We are here to evolve as a species not to allow hatred, ignorance, greed or fear — to be the cause of decisions that are going to impact on the lives of billions of people for hundreds of years.

Tell me it is not a miracle we are here at all?

Tell me that every single thing you see around you is not made from the carbon of stars?

Tell me that magic is impossible?

At the end of The Sunlight Pilgrims, conditions that tipped toward an ice-age are so far gone and people are still reaching out to their neighbours, to each other, but the infrastructures that hold us all — have abandoned every single one of us.

This can’t go on. 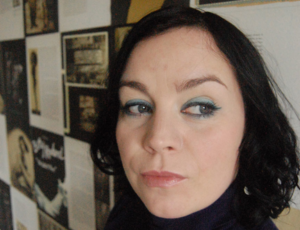 Jenni Fagan is an award-winning Scottish poet and critically acclaimed novelist who also turns her talents to photography and screenplays. Her debut novel, The Panopticon, received widespread critical acclaim in the UK and abroad and has been published in nine languages and is being adapted for film, for which she has written the screenplay. In 2013 Jenni was the only Scottish writer to be on Granta’s Best of Young British Novelists list, a once-in-a-decade accolade. She is a prize-winning poet and has twice been nominated for The Pushcart Prize and has been on lists for The Sunday Times Short Story Award, The Dublin Impac Prize, The James Tait Black Prize, The Desmond Elliott Prize and was named as one of the Waterstones 11 best worldwide debuts in 2012. Jenni has been Writer in Residence at The University of Edinburgh and her second novel, The Sunlight Pilgrims, was published in 2015 in the UK, US, France and Italy.