1. You must stay indoors! You may not leave your home!

all choir rehearsals must be

Our choristers all muzzled,

the muses in bondage, held hostage.

4. Lockdown stole our music, our very being –

‘No singing, no tuning fiddles and harps!’

Denied our most precious pleasure,

‘Not a sound from you!  Silence, forbear!’

In cruel silence, robbed of tune and melody

here we sit sad and sorrowing;

our harps and our voices mute.

Our choirs are prevented

from gathering and joining in song;

The rulers who hold us captive

and threw us muted into prison

will never grasp their guilt.

Yet our music will ever outlast them:

for here we remembered our concerts,

from football stadiums and pubs.

while we’re still held captive – though we pose

no threat, as musicians and poets.

7. For shame! We will not accept

This accursed injustice’s a disgrace –

as are the stones piled upon music’s cairn.

in freeing the innocent –

our torment must end!

9. Nothing to lose, everything to gain! Let’s stage a breakout!

I took as my motivation for this forty-line commissioned suite of poetry the considerable privation to musicians, singers and other artists constituted by the severe restrictions on rehearsing and performing together, which were imposed during Covid lockdown. These restrictions remain in place at the date of writing – despite increased freedoms now permitted to other sectors of society which pose greater risk in a pandemic (such as crowded sports stadiums and pubs).  Commercial interests and lobbying influence appear to exercise greater power over politicians’ decisions than the value to society and individuals of the creative arts.

There are two metaphors flowing through the suite: grief and imprisonment.  The loss of communal music-making, for those to whom this is precious, has been nothing short of an existential sorrow and a grieving process.  I have therefore structured this poetry suite in nine stanzas, reflecting the different stages of the ‘cycle of grief’, from shock, through numbness, pain, depression, lamentation and anger, to resolve, renewed purpose and hope.

The structure of the suite’s nine stanzas is a symmetrical series using five different poetic forms, with a sonnet (which, like ‘sonata’, means ‘a little sound’) at its core.  The sonnet is surrounded by four outer layers, on either side: a one-line rhymed couplet; a three-line haiku; a quatrain; and a five-line rondeau.  This perfectly symmetrical overall structure is a metaphor for music-making gripped in a vice, or incarcerated deep inside a high-security prison.  The innocent, silenced sonnet – music itself – is in solitary confinement.  Imagine an imprisoned choir, with the choristers each singing their part to each other, from their cells.

I took as my inspiration for the central sonnet the ‘Prisoners’ Chorus’ (Chorus of the Hebrew Slaves) in Verdi’s ‘Nabucco’; which is itself in turn based on Psalm 137 ‘By the Rivers of Babylon’.  My sonnet is a hybrid between the Petrarchan and Shakespearean sonnet forms (the Petrarchan structure of two quatrains, followed by a sestet; with a more Shakespearean rhyme scheme).

(The English translation does not replicate the formal rhyme and rhythm schemes of the Gaelic, but is in fairly free verse, conveying the meaning of the original.)

Literature Talks 2021 is a series commissioned by Literature Alliance Scotland, asking Scotland’s leading writers and literature producers to respond to the literary landscape by starting a conversation that challenges us to make change happen.

You can also listen to Sandy reading her poetry suite below, first in Gaelic and followed by the English translation. 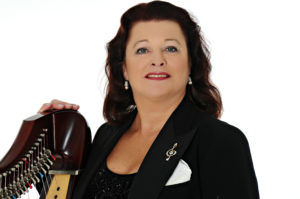 A Gold Medalist at Scotland’s Royal National Mòd (Oban Times Gold Medal 2017), Sandy has won various other Mòd music competitions as a singer, harpist and composer.  She is a Board member of the Gaelic College Sabhal Mòr Ostaig (SMO), and was previously a Board member of Bòrd na Gàidhlig.  She is an accredited FCIL (Fellow of the Chartered Institute of Linguists (CIOL), and former Chief Executive. In her earlier career, she was a senior executive in the UN and Commonwealth organisations.

Sandy holds Master’s degrees from Oxford, Harvard and London Universities. She is fluent in German and also speaks French, Spanish, and some Welsh and Greek.