Many congratulations to Scots poet J.O. Morgan who has won the 2018 Costa Poetry Award for his book-length poem, Assurances (Jonathan Cape).

The forty-year old, who is based in Stow in the Scottish Borders, took home the Award on Monday 7 January 2019 for his work on the nuclear tensions of the Cold War period.

Speaking to BBC’s Good Morning Scotland, he said: “I think I can get round it in my head if I remind myself that it is the book that has won, not me,

“I get some benefit from it, obviously, but really it is great for the book to hopefully get more readers to it.”

Mr Morgan takes £5,000 for winning the poetry section and is one of five winning writers now in contention for the overall book of the year award to be announced at the end of the month. 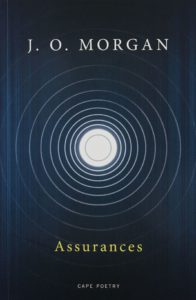 The following information is taken from the Costa Book Awards website.

A war-poem both historic and frighteningly topical, Assurances begins in the 1950s during a period of vigilance and dread in the middle of the Cold War: the long stand-off between nuclear powers, where the only defence was the threat of mutually-assured destruction. Using a mix of versed and unversed passages, Morgan places moments of calm reflection alongside the tensions inherent in guarding against such a permanent threat. A work of variations and possibilities, we hear the thoughts of those involved who are trying to understand and justify their roles. We examine the lives of civilians who are not aware of the impending danger, as well as those who are. We listen to the whirring minds of machines; to the voice of the bomb itself. We spy on enemy agents: always there, always somewhere close at hand. Assurances is an intimate, dramatic work for many voices – lyrical, anxious, fragmentary and terrifying; a poem about the nuclear stalemate, the deterrent that is still in place today, how it works and how it might fail, and what will vanish if it does.

About the author:
J. O. Morgan was born in Edinburgh in 1978 and is the son of a former RAF officer who was involved in maintaining Britain’s Airborne Nuclear Deterrent. Assurances is Morgan’s response to his father’s tremendous responsibility: it eavesdrops on the thoughts of those trying to understand and justify their roles in keeping peace by threatening war. Those overheard include civilians unaware of danger, enemy agents, the whirring machines and even the bomb itself.

What the judges said: “We were all gripped by this polyphonic book-length poem and dazzled by its originality and inventiveness.”