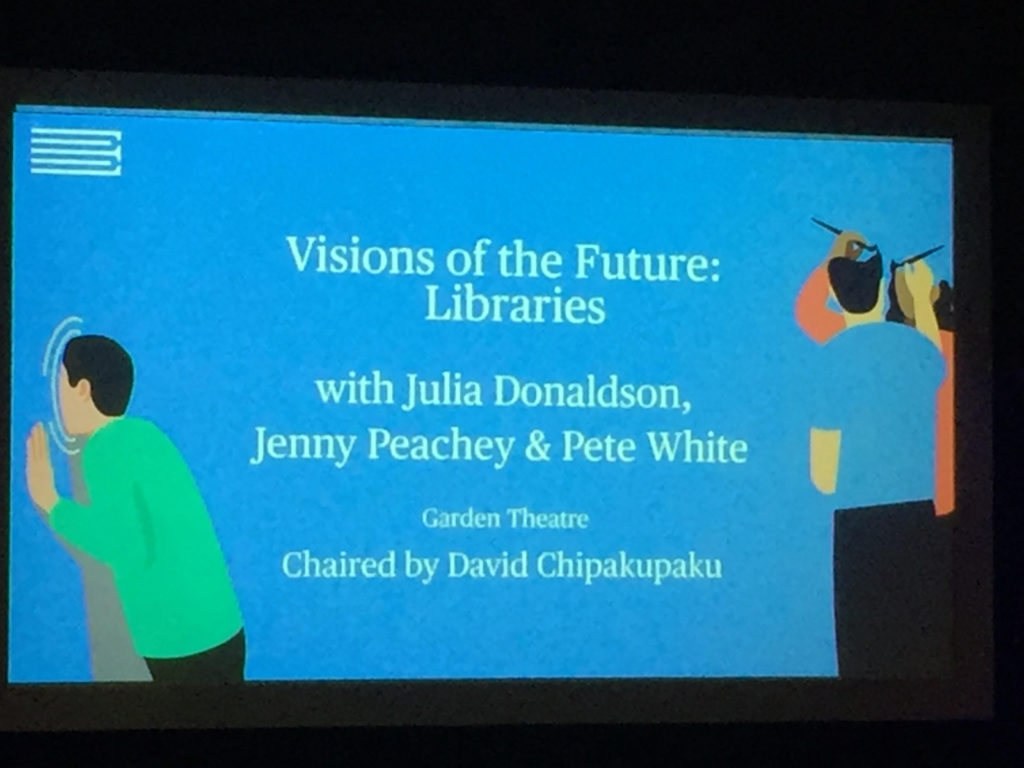 Format: short presentation by each guest, followed by group discussion, then audience questions.

Read out two examples of letters from parents who use the libraries in different ways, including the difficulties in accessing ‘hubs’ – rather than smaller local libraries – for some parents. She had heard comments that some librarians didn’t dare speak out: “librarians are not allowed to say, ‘our libraries are doing well'”. Emphasised that although understandable some cuts need to be made in times of financial difficulty, it would be disastrous if buildings were sold and we couldn’t get them back.

Shared stats from Carnegie Trust report ‘Shining a Light: The future of public libraries across the UK and Ireland.’ Showed that although library membership is doing well, frequency of use is down (from 2011-2016), and that there’s a value action gap (i.e.libraries are seen as crucial but are not necessarily being used). Issue of two very different user groups, who need two different messages. There’s an appetite for change amongst the public, including increased council services available in libraries, more events and more cafes). Increased range of books was not seen as a priority for many people. Potential improvements: digital offer, a more tailored offer, which recognises that it’s not a universal/broad service? Also: Create a workplace culture of innovation which empowers library staff and share learning across the jurisdictions, which all have different strengths and weaknesses.

Pete talked about his experience in the prison system, including being allocated to work in the library during his sentence. Shared key stats including: 80% of prisoners are from the top 5% more impoverished areas. Two thirds of prisoners have a reading age of less than 11, two thirds have mental health issues and two thirds have issues with addiction. Each year 250,000 people have a court report written about them. The prison population remains about steady with approx 19,000 in and out each year. He explained how libraries are the “opportunity to take something forward”, emphasising that they are linked to communication as a whole. The average middle-class household will use around 32,000 words per day, whereas a family with two children and one parent with an addiction is likely to use around 600. “That’s a lot of missing words by the time they grow up”. He ended with “libraries are vital, simple as.”

– discussion of important of libraries to people once released from prison – JP pointed out we could connect the dots.

– JP: Explained that something is being lost in communication, for example many people surveyed said they wanted to be able to reserve books online, which they already can. Also: think about the ‘why’ of libraries when spreading the message, and recognise it’s not a universal message.

– PW: Libraries could “step sideways from tradition” and become more fearless, with more involvement from young people. Can be intimidating to some people.

– JP: “Libraries are the last free, safe, civic space we have.”

– Discussion of the social return on investment, e.g. training volunteers, which means they’re seen as people with the ability to contribute. Importance of quantifying long-term value and preventative spend, e.g. libraries save the NHS millions each year.

– Questions raised about who do we expect to invest in libraries? (US model of philanthropy mentioned). How can they generate money? How to change the social mindset about libraries?

DC: Birmingham! But with all local services still intact.

JD: I love the variety, and how each one is so different.

JP: A library which is immediately welcoming and full of people