Ready to ROAR: Group calls out gender inequalities within the Scottish Literary sector

The group, which was formed in 2016, is working to combat inequality in Scottish writing and publishing. With members from Scottish PEN, Creative Scotland, Scottish Book Trust, Waterstones, Glasgow Women’s Library and more, ROAR represents voices from within the literary sector. 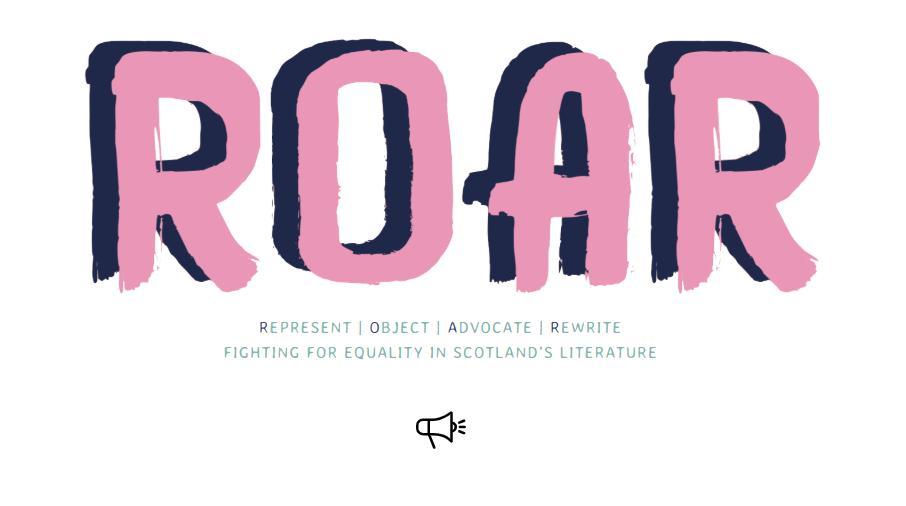 ROAR reveals new findings by doctoral researcher, Christina Neuwirth: Women of Words: Gender equality in contemporary writing and publishing in Scotland. The research is funded by Arts and Humanities Research Council and Scottish Graduate School for Arts and Humanities.

In 2018, Scotland celebrated Muriel Spark’s work in what would have been the year of her 100thbirthday, and the new Scottish £5 note sports female writer Nan Shepherd’s portrait. However, this analysis indicates that more needs to be done to achieve equality in the visibility and value assigned to women in Scottish literature.

The research, covering the period January to December 2017, found that only 37% of authors whose books were published in Scotland were women (14.5% lower than the general population).

The genre in which women fared the worst was non-fiction about Scotland: only 4 women were published in 2017, compared to 30 men.

There were only three genres where women were more represented than men: literary narrative non-fiction, where 9 women were published compared to 1 man; and romance fiction, with 11 women authors and 3 male authors.

Scottish media coverage of literature was also analysed by the study and revealed that in 2017, national newspapers The Herald and The Scotsman published reviews of 604 authors’ books: 65% of authors reviewed were men, and 35% were women.

The disparity was even greater in the number of reviews: 86% of reviews were written by men, and 14% by women. Of all reviews, 59% were reviews of male authors’ books, written by male reviewers.

In direct contrast, 7% of all book reviews that year were women’s books reviewed by women.

Book festivals in Scotland fared better and were found to be more representative of gender compared to publication or media coverage.

In 2017, Aye Write, Bloody Scotland and Edinburgh International Book Festival hosted events with 1,392 authors, and 44% of all authors appearing at these festivals were women.

Of these, 461 were solo author events, in which the representation of women writers dropped to 38%.

Book festivals were the only area of the sector in which non-binary authors were represented in 2017, making up 0.4% of all programmed authors.

Research is still ongoing, and ROAR aims to publish an account of gender equality in Scottish literary culture every year, as a starting point for effecting change. More information can be found at www.roar.scot

“This important research demonstrates unequivocally that we collectively have a long way to go to level the gender playing field, and that as a sector we need to work together and take responsibility to contribute towards positive change in all that we do, every day.

“For LAS and our members that means driving for better representation and inclusivity at all levels across all our activities to better reflect the society we live in. It means listening and learning and recognising that stereotypes around gender in writing and publishing need to be challenged and that it starts with us and our work. It means paying attention to the way we work and building opportunities and programmes that are open and inclusive. It means that we need to roll our sleeves up.”

“The ongoing research underpinning ROAR’s investigations into our lived experience of inequalities in the literature and publishing sector are revealing. In particular, women are disadvantaged in terms of book reviewing, and in terms of the proportions of Scottish non-fiction books. This gender discrimination must be addressed in order to make the sector – and the country – a fairer, more representative, and more democratic space. ”

1) 454 authors were published in Scotland during the period January to December 2017.

4) The Scottish Census 2011 captured information about male and female respondents, with 48.5% of the population being men and 51.5% being women. A survey conducted by the Equality and Human Rights Commission indicates that 0.4% of the UK population identify in a way that is not male or female (Glen and Hurrell 2012, 5).

Women of Words: Gender equality in contemporary writing and publishing in Scotland

Ten Scottish women from the fields of the arts, culture, politics, activism and science have been honoured and inducted into the esteemed Saltire Society ‘Outstanding Women of Scotland’ community at a special event in Glasgow.

This year’s ten inductees include the UK’s youngest MP Mhairi Black, distinguished scientist Sarah Wanless and actor Maureen Beattie, who is president of the actors’ union Equity and a member of the Royal Shakespeare Company’s Histories Ensemble. Also featured in this year’s list of inductees are Chief Executive of Community Justice Scotland Karen McCluskey and pioneering campaigners Talat Yaqoob, Beth Morrison and Isabel McCue, alongside choreographer Janice Parker and literary agent Jenny Brown. Completing the list of 2018 inductees is Rosemary Ward, a notable figure in the fields of Gaelic education and literature (and a Trustee of LAS).

Since it began in 2015, the ‘Outstanding Women of Scotland’ campaign has recognised and celebrated Scottish women from all walks of life and the inspiration their achievements set for the next generation. Each year, the campaign invites members of the public to nominate living contemporary examples of Scottish women who have made a significant contribution to Scottish culture and society for induction into the Outstanding Women of Scotland community. Past inductees have included singer-songwriter and activist Annie Lennox, bestselling author J.K. Rowling and First Minister Nicola Sturgeon.

Full details of this year’s ten inductees are as follows:

Glasgow Women’s Library Enterprise Development Manager, Sue John, said:
“Glasgow Women’s Library is thrilled to be working with the Saltire Society once again. Each year, another cohort of incredible women is inducted as Outstanding Women of Scotland. Through their extraordinary contributions to Scotland and the wider world they are role models for us all, and I am pleased have celebrated their achievements with them on this special occasion.”

Saltire Society President, Sally Mapstone, said:
“Across the arts, politics, science, and vital areas such as justice, special needs and mental health, Scotland generates outstanding women, whom the Saltire Society is proud to celebrate. Women’s leadership, creativity, and companionship, done on their own terms and to enhance the lives of others, characterise this year’s inspiring inductees.”

Saltire Society Programme Director, Sarah Mason, said:
“It is a great privilege to once again honour truly inspiring women who contribute to both Scotland and internationally, who change the world we live in. The Saltire Society exists to promote and celebrate Scottish culture and heritage and we are proud to work with Glasgow Women’s Library on the Outstanding Women of Scotland. Over the years, the contribution of Scotland’s women to the cultural life of this country has been truly remarkable but sadly too often underestimated or overlooked. By building the Outstanding Women of Scotland community year by year, I hope we can begin to address that shortcoming and bring women to the forefront.”