The long-awaited Re·creation anthology is launching this summer!

The Re·creation anthology contains new work from nearly 30 writers of the LGBT+ community across the UK and will be launched by Stewed Rhubarb Press.

The launch event will take place at 7.30pm on Saturday 30 July 2022 in Edinburgh, hosted by Lighthouse Books, at the Life Church, Davie Street, EH8 9EB.

It will include readings from a glittering array of the anthology poets – including Andrew McMillan, Jay Gao, Harry Josephine Giles, Nat Raha, Dean Atta, and this year’s T.S. Eliot Prizewinner Joelle Taylor – as well as Q&A with editors Éadaoín Lynch and Alycia Pirmohamed.

The event will be livestreamed and BSL interpretation will be provided. 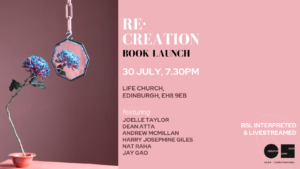 With support from Creative Scotland Open Fund, the Re·creation project ran from spring 2021 to summer 2022, inviting anyone in Scotland and the UK to write poems, develop their craft, and build a community through workshops, round-table feedback, and one-to-one mentorship.

The project took its inspiration from Audre Lorde, and its title from her poem of the same name, placing roots in play, refreshment, recovery, restoration and creativity.

From there grew the landmark anthology, over half of which contains poems from BIPOC poets, over a third from trans and genderqueer poets, and poets overall from every adult age group.

“The poets in Re·creation make up a new and vivid constellation. This is a bright, interlocking anthology that focuses a clear light on experiments from new and established voices. The poems here are full of exciting suppositions, recoveries, and together make a collective language strong enough to shine the way to new possibilities for queer poetry, bringing us closer to a place where the air, as Andres N. Ordorica has it, is ‘renewed and free’.”

‘In this powerful and affecting anthology, queer experience – and queer poetics – are brought to life with complexity, vividness, beauty and formal innovation. An anthology that allows richness, shuts down no question, and offers the reader a selection of the very best queer poets at work today.’

Stewed Rhubarb Press was founded in 2013, winning the Callum Macdonald Award for its first pamphlet, The Glassblower Dances by Rachel McCrum. Since then, they have launched 3 collections, 2 anthologies including the national Covid remembrance book “I Remember”, and published 24 pamphlets from writers ranging from Edinburgh to the Appalachian Mountains, including playwright Jo Clifford, Scottish spoken-word poets Dr HJ Giles, Colin Bramwell, Hannah Lavery, and David Kinloch. Stewed Rhubarb is known for its wildly diverse list, authentic appreciation of the spoken-word scene, and high production values. Its mission is to treat spoken-word poetry with the enthusiasm and respect it deserves.

Creative Scotland is the public body that supports the arts, screen and creative industries across all parts of Scotland distributing funding provided by the Scottish Government and The National Lottery. Further information at creativescotland.com. Follow us on Twitter, Facebook and Instagram. Learn more about the value of art and creativity in Scotland and join in at www.ourcreativevoice.scot

Co-editor Éadaoín Lynch is an Irish poet & researcher based in Edinburgh, whose work has been published previously in The Kindling Journal, the Fawn Press anthology Elements, and shortlisted for the Jane Martin Poetry Prize and the London Magazine Poetry Prize. Their debut pamphlet, Fierce Scrow, is forthcoming from Nine Pens Press in August 2022.

Co-editor Alycia Pirmohamed is author of the pamphlets Hinge and Faces that Fled the Wind, and co-author of Second Memory. In 2020 Alycia was the winner of the Edwin Morgan Poetry Award. Her debut poetry collection Another Way to Split Water is forthcoming with YesYes Books (US) and Polygon Books (UK) in 2022.

Reproduced from the press release.