Congratulations to children’s writer Maisie Chan who has been appointed as the 2020 Dr Gavin Wallace Fellow.

She will undertake her Fellowship in partnership with Moat Brae, the National Centre for Children’s Literature based in Dumfries.

Currently working on a forthcoming book for a prominent Hachette literacy series, Maisie has been gaining recognition with her new collection of tales, myths and legends,  Stories from Around the World (Scholastic) and The Legend of Hua Mulan in the Ladybird Tales of Superheroes.

On news of her appointment, Maisie Chan said: “I am absolutely thrilled to be the Gavin Wallace Fellow this year. In these uncertain and unprecedented times, the challenge for myself and for others is to make sense of our ever-changing world and our place in it. The original brief was to use the gardens at Moat Brae for inspiration.

“As I cannot physically engage in the space at present, I am accessing the centre’s archives digitally, but also, I want to ask others (including children) to be part of my creative process.

“Over the next year, I hope to explore the different ways in which gardens or the lack of them impact our lives. I also want to write about intergenerational links, and about how our past, present and future are always in flux depending on who is telling the story.

“I cannot wait to begin the residency and for the gardens (and landscapes) of the mind to blossom on the page, as they do in real life.”

Dr Simon Davidson, Director, Moat Brae, said: “I’m thrilled that Maisie will be our first writer-in-residence. She is a phenomenal talent with a unique approach to writing for children. We have asked Maisie to respond to the very garden that inspired a young JM Barrie in order to create work that resonates with our theme of Imaginary Worlds.

“The Gavin Wallace Fellowship is a wonderful award. I’m particularly pleased that Creative Scotland elected to give the award to a children’s author this year as it shows their commitment to a genre of writing that doesn’t always get the attention it deserves.

“I’m sure Maisie’s residency will further heighten the profile of children’s writing in Scotland and indeed the National Centre, and I look forward to welcoming her to Moat Brae.”

The residency will begin on Friday 1 May, initially on a digital basis due to restrictions around Covid-19, until the Centre is reopened.

Mairi Kidd, Head of Literature, Languages & Publishing, Creative Scotland said: “We can’t wait to see how Maisie and Peter Pan Moat Brae engage with young readers during the challenging weeks and months to come, using storytelling and imagination to help keep children and their families happy and well.”

The Dr Gavin Wallace Fellowship was established in 2014 in memory of Dr Gavin Wallace who dedicated his entire professional life to supporting Scottish literature.  Following the sad loss of Dr Wallace in February 2013, Creative Scotland established an annual fellowship in his name to honour his memory and commemorate and continue his good work. The Fellowship offers writers time and mentorship to develop their practice with some of the country’s leading literary institutions and is supported by The National Lottery through Creative Scotland. This year the Fellowship was designed specifically to support a writer for children and young people.

Fellows receive a stipend of £20,000, and the host organisation receives £5,000 of National Lottery funding, through Creative Scotland.

Maisie Chan is a children’s author based in Glasgow. She has written for early readers (Hachette) and had short stories published in Ladybird Tales of Superheroes (Penguin) and a full short story collection called Stories From Around the World (Scholastic) as well as many stories for The Big Think; a well-being curriculum based around stories for primary school children.

Maisie founded the Glasgow Children’s Writers Group, is a mentor for new writers and has led creative writing sessions for adults and children. She has run workshops for Writing West Midlands and Scottish Book Trust (Live Literature) and has appeared on panels at the London Book Fair, Birmingham Literature Festival and the National Writers Conference.

About Moat Brae House and The Neverland Discovery Garden

Moat Brae House and its Neverland Discovery were once the magical land where the creator of Peter Pan, J M Barrie, played as a child.  Moat Brae opened on 1st June 2019 as an international visitor attraction and Scotland’s National Centre for Children’s Literature and Storytelling.

Moat Brae is a visitor destination providing an educational and historic environment.  It is an inspiring space where reading and storytelling will be celebrated for generations to come. The ground floor exhibitions tell the story of JM Barrie’s time in Dumfries whilst other floors provide spaces for exploring the wider remit of children’s literature and to entertain visitors of all ages.

The Neverland Discovery Garden provides inspiration through its stunning setting by the River Nith. The Trust commissioned landscape architect Peter McGowan to undertake the design and delivery of the garden which stretches across almost two acres. The garden includes several new features which evoke the Peter Pan story and its imaginative planting has transformed it into a garden of discovery. Education is a key element and is woven within the horticultural excellence and diversity of planting.

Moat Brae is currently closed until further notice due to coronavirus restrictions.  For further information please go to:

The Peter Pan Moat Brae Trust was set up in 2009 to save Moat Brae House and garden from demolition and to celebrate its international literary connection as ‘The Birthplace of Peter Pan’. In the ten years since, the Trustees have given countless hours of commitment to manage the delivery of a project of huge economic and cultural importance to the town, the region and to Scotland.

As Patron of the Trust since 2011 Joanna Lumley championed the £8 million fundraising campaign which turned the derelict building into an international visitor attraction expected to attract 31,000 people a year and bring £1.3 million to the area’s economy.

More widely, storytelling is considered hugely important to the development of social and cultural behaviour with tangible benefits for human interrelations leading to better cultural integration, understanding and tolerance.

Among the key partners are Heritage Lottery Fund, The Castansa Trust, Historic Environment Scotland, Scottish Enterprise, Scottish Government, Dumfries & Galloway Council and Creative Scotland and The Robertson Trust. There have also been many other funders and donors including private trusts and individuals. The ten-year project has also captured the hearts of many supporters and valued volunteers within the Dumfries & Galloway community as well as from across the UK and internationally.

For any other enquiries please contact Simon Davidson: simon@peterpanmoatbrae.org / 07938 912746

Moat Brae, the National Centre for Children’s Literature and Storytelling based in Dumfries, will host the 2020 Dr Gavin Wallace Fellowship.

Set up to support Scottish based mid-career and established writers to develop creative work during a year-long residency within a variety of cultural, education, health and other environments, the Fellowship has already hosted partnerships between Jenni Fagan at Edinburgh’s Summerhall, Morna Young at Aberdeen City Council’s Creative Learning resource, Kirsty Logan at the Association for Scottish Literary Studies and Martin O’Connor at the Playwright’s Studio Scotland in partnership with the Royal Lyceum Theatre.

Dr Simon Davidson, Centre Director, Moat Brae said: “Being chosen as the host for next year’s Gavin Wallace Fellowship is a great privilege for Moat Brae and it has given us a wonderful opportunity to gain new insights into the methods and sources of inspiration that go into creating work for younger readers.

“Our theme next year is Imaginary Worlds and the successful author who becomes our writer-in-residence through the Fellowship will have arguably the most inspirational garden in children’s literature to draw upon as source material.

“I am very much looking forward to welcoming the first ever writer-in-residence to the National Centre for Children’s Literature & Storytelling and I’m sure they will find their time here both inspiring and illuminating.”

Creative Scotland’s Harriet MacMillan said: “Our hope for this year’s Fellowship was to find a host who could offer an interesting opportunity for a writer for children and young people, and Moat Brae, with its connections to J.M. Barrie and Peter Pan, not to mention its wonderful children’s literature collections, will provide the ideal context for a year of writer development. We look forward to supporting Moat Brae as they recruit and appoint the 2020 Fellow and we are excited about the work that may emerge from this partnership.”

Applications for writers to participate in the Fellowship will open in the new year.

The Dr Gavin Wallace Fellowship was established in 2014 in memory of Dr Gavin Wallace who dedicated his entire professional life to supporting Scottish literature.  Following the sad loss of Dr Wallace in February 2013, Creative Scotland established an annual fellowship in his name to honour his memory and commemorate and continue his good work. The fund is supported by The National Lottery through Creative Scotland.

We are delighted to announce that The Peter Pan Moat Brae Trust, which runs the National Centre for Children’s Literature and Storytelling, has joined LAS as a member.
Moat Brae in Dumfries, Dumfries and Galloway in South-West Scotland was acknowledged by author JM Barrie as the inspiration for Neverland. 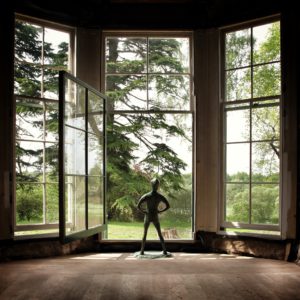 The Trust aims to raise £5.8m to create an enchanted land of children’s stories at the birthplace of Peter Pan. The Centre will include a Neverland Discovery Garden when it opens for new adventures in 2018.