Dr Michael Dempster has been named as the successful Scots Scriever and begins his two-year residency at the National Library of Scotland on 27 June 2018. 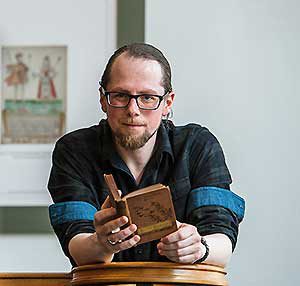 Growing up speaking Scots at home, Dr Dempster has made the Scots language a prominent feature of his academic and artistic work. He has written librettos and graphic novels in Scots, explored the use of Scots with sufferers of dementia within the NHS, and worked with schools and community groups to tackle stigma and prejudice surrounding the Scots language.

A prominent linguist, Dempster undertook a Psychology PhD at Glasgow University, researching the processing of rhythmical signals critical to language and music. Dempster has coached film industry professionals in use of the language, produced award-winning podcasts, written comedy sketches performed across the Edinburgh Fringe and TV pilots for the BBC and Comedy Unit and delivered the first ever TED talk in Scots.

Upcoming works include a Scots-Emoji dictionary and ‘Mind yer Language’ — a comprehensive guide to Scots.

‘Michael Dempster clearly has a passion for the Scots language. He has a strong artistic track record across a range of mediums, an academic background in linguistics, and he already promotes the language in everything he does. I can’t wait to see what he comes up with in this residency.’

‘We are delighted to be able to appoint a new Scots Scriever during what is an exciting time for Scots. With more than 1.5 million people identifying as Scots speakers via the most recent census, with the upcoming UN Year of Indigenous Languages in 2019 and with development work in Scots gaining traction around the country, we are confident the Scriever will play an active and prominent role in this upcoming period of development.

‘The appointment of Michael Dempster to the role I believe will give us the best possible chance of taking advantage of these unique circumstances. He has a vision for Scots which stretches across different parts of society, is contemporary and dynamic and is rooted in his own artistic and academic practice.

‘We look forward enormously to working with Michael, with the National Library and with our partners in Scots development around the country in this exciting new phase of the scriever project.’

‘Michael’s knowledge of the collections at the National Library, coupled with his academic background and sheer passion for Scots, make him an exciting choice for this residency. He is committed to Scots as a living language and promotes its use and benefits, not only in literature but in all aspects of public life. G’aun yerself, Michael.’

Dr Michael Dempster’s appointment will run from July 2018–2020, which spans the UN Year of Indigenous Languages in 2019.

A joint initiative between the National Library and Creative Scotland, the Scriever role is designed to produce original creative work in Scots, its variants and dialects, across any art-form, as well as raising awareness, appreciation and use of Scots across the country and amongst all parts of the population.

Creative Scotland published its first Scots Language Policy in June 2015, in which the role of Scots Scriever was identified. The policy underlined the organisation’s commitment to supporting the language through its own work and the work that it funds across the arts, screen and creative industries.

Hamish MacDonald was appointed as the inaugural Scots Scriever in August 2015 and completed his residency at the National Library of Scotland in September 2017. MacDonald developed the ‘Wee Windaes’ website which captures the breadth and variety of Scots, in all its variants and dialects, from its beginnings to the present day.

Reproduced from the NLS media release.