Congratulations to Darren McGarvey, better known as rapper Loki, who is this year’s winner of The Orwell Prize for Books for Poverty Safari: Understanding the Anger of Britain’s Underclass (Luath Press). 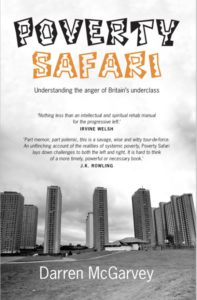 Chair of judges, Andrew Adonis said: “George Orwell would have loved this book. It echoes Down and Out in London and Paris and The Road to Wigan Pier. It is heart-rending in its life story and its account of family breakdown and poverty. But by the end there is not a scintilla of self-pity and a huge amount of optimism. It made me see the country and its social condition in a new light.”

The judges for The Orwell Prize for Books are politician, academic and journalist Andrew Adonis (Chair), Literary Journalist and Artistic Director of Words and Literature of the Bath Festival Alex Clark, novelist Kit de Waal, and Deputy Life & Arts Editor for the Financial Times Lorien Kite.

The Orwell Prize rewards the writing that comes closest to achieving English writer George Orwell’s ambition to ‘make political writing into an art’.

This year’s winners each focus on modern Britain, revealing a ‘turn to the nation’ in political writing in the continued wake of the EU Referendum result.

Each year prizes are awarded for political writing in Books, Journalism and the Prize for Exposing Britain’s Social Evils, sponsored and supported by the Joseph Rowntree Foundation.

Each £3,000 prize was presented by Richard Blair, George Orwell’s son and is determined by a separate panel of independent judges.

The winner of the Prize for Journalism is Carole Cadwalladr for her reports in The Observer on the impact of big data on the EU Referendum and the 2016 US presidential election while ‘On the Edge’, a Financial Times team of Sarah O’Connor, John Burn-Murdoch and Christopher Nunn won The Orwell Prize for Exposing Britain’s Social Evils for their spreadsheet-and-shoeleather’ report on the relationship between poverty and mental health in ‘forgotten towns’ left behind by the UK economy

The Orwell Foundation, based at University College London, home of the Orwell Archive, is sponsored and supported by Political Quarterly, the Joseph Rowntree Foundation and Richard Blair.

The winners were announced on Mon 25 June 2019 at a prizegiving ceremony at the Royal Society for the encouragement of Arts, Manufactures and Commerce.