The Saltire Society announced the winners of the 2019 Literary Awards at a glittering ceremony at the National Museum of Scotland on Saturday 30 November. 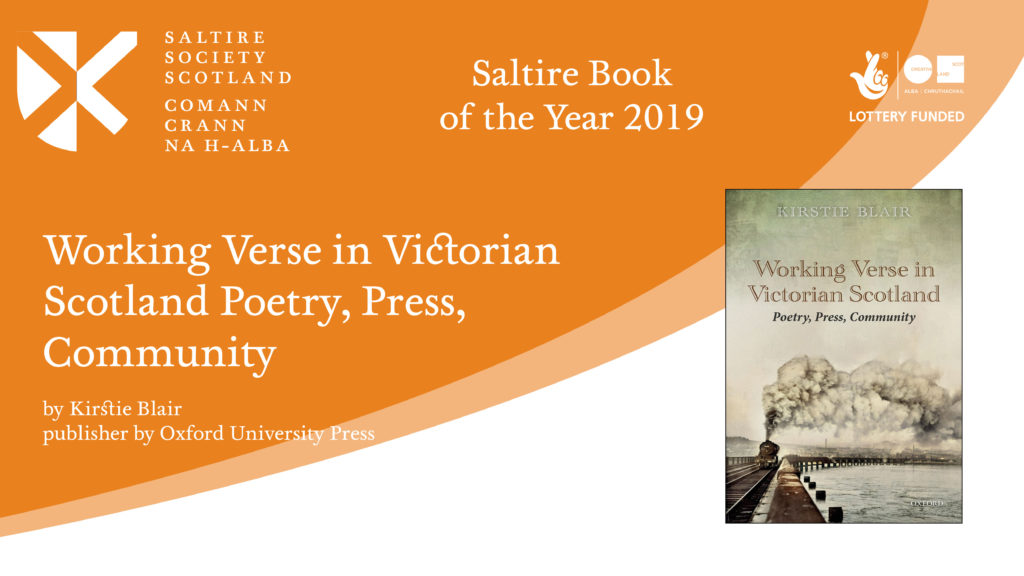 In a ceremony presided over by BBC Presenter Cathy MacDonald, Awards were presented in six literary categories including The Saltire Society Scottish Fiction Book of the Year won by Ewan Morrison with his novel Nina X (published by Little Brown Group/Fleet Imprint) and The Saltire Society Scottish Non Fiction Book of the Year won by Melanie Reid for her memoir The World I Fell Out Of (published by Fourth Estate, Harper Collins).

The Saltire Society Scottish Poetry Book of the Year was presented to Janette Ayachi for her collection Hand Over Mouth Music (published by Pavilion Poetry),

The Saltire Society Scottish First Book of the Year Award was presented jointly to two authors – Stephen Rutt for his book The Seafarers:  A Journey Among Birds (published by Elliott & Thompson) and Clare Hunter for her Threads of Life (published by Sceptre/Hodder & Stoughton).

The panel of Judges for this Award were taken by Rutt’s personal journey from an overwhelming job to being among seabirds, “the book’s transportative aspect means the reader not only learns new things but experiences them”.

On Threads of Life they commented, “A work that weaves the political, communal and complex history of needlecraft. Hunter shares her personal relationship to this craft while shining a light on an often-overlooked aspect of the creative arts, one brilliantly stitched into women’s history, and larger global politics.”

Sarah Mason, Programme Director for the Saltire Society, said: “Scotland’s National Book Awards 2019 have again shown the astounding literary talent of Scotland and we congratulate all our recipients and shortlistees. As well as being a vital opportunity for the Saltire Society and its partners to celebrate and recognise creativity in literature and publishing, the Awards raise their wider profile both nationally and internationally.

“Our special congratulations go to our inaugural Lifetime Achievement recipient, Alasdair Gray, whose influence runs deep within Scotland and much further afield. We are delighted to be able to recognise his contribution in this way.

“The breadth of talent shown by the winners of the Saltire Society’s Awards show that Scotland’s literary scene is in very safe, very gifted hands. “

Working Verse in Victorian Scotland: Poetry, Press, Community was selected as The Saltire Society Scottish Book of the Year by a panel of judges from the winners of the five Literary Awards.

The judges found its accessibility in subject and in its writing profound. The fact that it is an important, significant piece of research did not discolour its enjoyability, with laugh out loud moments and fascinating facts. The judges felt a warmth from it and to it.

The National Library of Scotland support the Saltire Society Scottish Research Book of the Year, and The National Library of Scotland’s Associate Director of Collections and Research, Robin Smith said: “It’s not every day the winner of the research category scoops the overall Saltire prize, which demonstrates just what a compelling and important read Ms Blair’s work is. Research adds to our collective understanding of the world around us, and sharing the resultant knowledge is just as important as the activity itself. We encourage and promote research on every subject imaginable at the National Library, and we’re delighted to continue to support this award.”

First Minister Nicola Sturgeon said: “Scotland’s distinguished literary culture is a notable part of our national identity and the Saltire Literary Awards do an excellent job of recognising our talented writers and authors. I’d like to offer my warmest congratulations to all of the award winners.”

Winner of the inaugural Saltire Society Lifetime Achievement Award Alasdair Gray, who was born in 1934, graduated in design and mural painting from Glasgow School of Art.  His acclaimed first novel, Lanark, written over almost 30 years, was described by The Guardian as ‘one of the landmarks of 20th-century fiction’.

Since the publication of Lanark in 1981 he has written, designed and illustrated seven novels, including Poor Things which won him a Whitbread Novel Award and Guardian Fiction Prize. several books of short stories, a collection of his stage, radio and TV plays and a book of his visual art, A Life in Pictures. 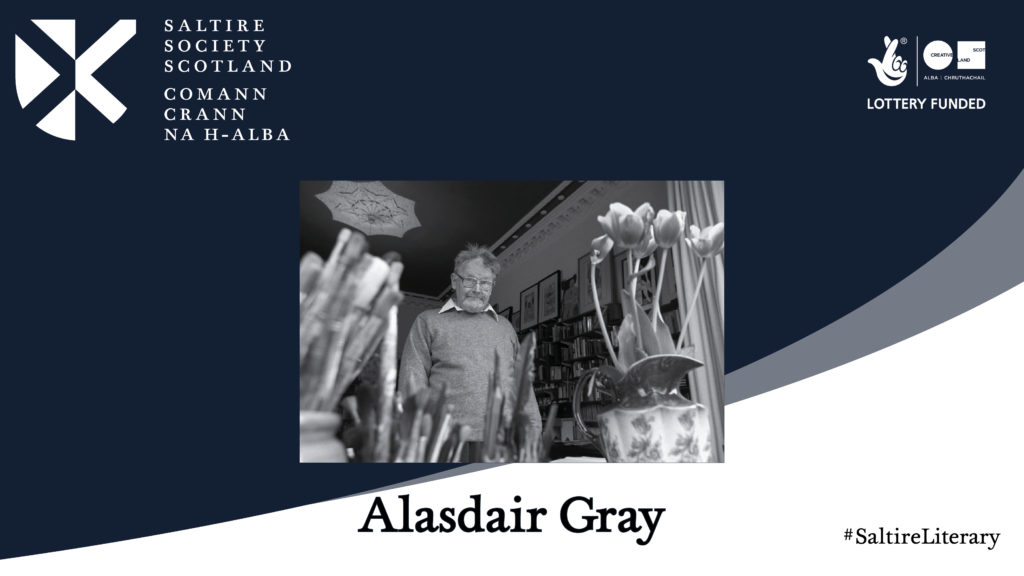 The Saltire Society judges commented, “Before the publication of Lanark, Alasdair Gray was best known for his painting. A seminal piece, Lanark is often referred to as the Glasgow Ulysses. This, however, was not a one-off masterpiece. For over 40 years, Alasdair Gray’s plentiful and diverse work has influenced writers and the literary scene worldwide.”

Mairi Kidd, Head of Literature, Languages & Publishing, Creative Scotland said: “In awarding the inaugural Lifetime Achievement Award to Alasdair Gray, the Saltire Literary Awards have recognised a true iconoclast. Gray‘s work blazed a trail for rich and experimental Scottish writing, and this year’s winners list is packed with precisely that. Gray, of course, is a polymath with an incredible body of illustration, visual art and design to his name; it, therefore, seems particularly apt that the Awards should recognise book design for the first time this year. Congratulations to Alasdair, Kirstie, and all the other winners.”

Two publishing Awards were presented – The Saltire Society Scottish Publisher of the Year was awarded to Sandstone Press, based in Inverness who have provided a platform for Scottish subjects and taken risks with translated fiction, resulting in publishing the winner of this year’s Man Booker International Prize.  404 Ink was Highly Commended.

The Saltire Society Emerging Publisher of the Year Award, presented in partnership with Publishing Scotland, was awarded jointly to Kay Farrell of Sandstone Press and Alan Windram of Little Door Press.  Jamie Norman of Canongate books was Highly Commended.

In a new Award for 2019 The Wind That Lays Waste by Selva Almada (translated by Chris Andrews), published by Charco Press and designed by Pablo Font was awarded The Saltire Society Scottish Book Cover of the Year, with judges saying, “The design echoes the story within while allowing the viewer room to take from it their own meaning. The use of colour and an evocative image creates a strong, bold cover.”

Finally, The Calum Macdonald Memorial Award for the publisher of an outstanding example of pamphlet poetry published during the previous year was won by Sarah Stewart for Tapsalteerie, Glisk. This Award is administered by the Scottish Poetry Library and it is the first time it has been presented as part of the Saltire Society Literary Awards.

The winners of each category received a bespoke Award created by Inverness based-artist Simon Baker of Evergreen Studios and a cash remuneration.

Saltire Society have announced their Saltire Literary Award Shortlists for 2018.

The shortlists for six literary awards and two publishing awards were officially announced at an event hosted at the West End branch of Waterstones in Edinburgh.