Ten Scottish women from the fields of the arts, culture, politics, activism and science have been honoured and inducted into the esteemed Saltire Society ‘Outstanding Women of Scotland’ community at a special event in Glasgow. 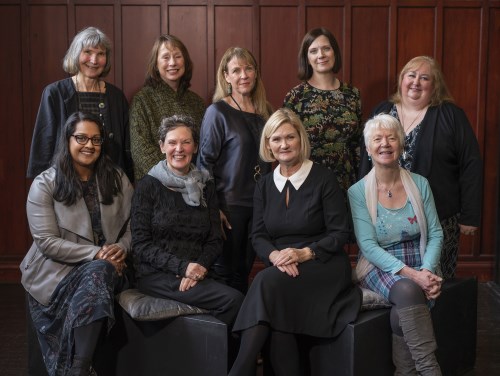 This year’s ten inductees include the UK’s youngest MP Mhairi Black, distinguished scientist Sarah Wanless and actor Maureen Beattie, who is president of the actors’ union Equity and a member of the Royal Shakespeare Company’s Histories Ensemble. Also featured in this year’s list of inductees are Chief Executive of Community Justice Scotland Karen McCluskey and pioneering campaigners Talat Yaqoob, Beth Morrison and Isabel McCue, alongside choreographer Janice Parker and literary agent Jenny Brown. Completing the list of 2018 inductees is Rosemary Ward, a notable figure in the fields of Gaelic education and literature (and a Trustee of LAS).

Since it began in 2015, the ‘Outstanding Women of Scotland’ campaign has recognised and celebrated Scottish women from all walks of life and the inspiration their achievements set for the next generation. Each year, the campaign invites members of the public to nominate living contemporary examples of Scottish women who have made a significant contribution to Scottish culture and society for induction into the Outstanding Women of Scotland community. Past inductees have included singer-songwriter and activist Annie Lennox, bestselling author J.K. Rowling and First Minister Nicola Sturgeon.

Full details of this year’s ten inductees are as follows:

Glasgow Women’s Library Enterprise Development Manager, Sue John, said:
“Glasgow Women’s Library is thrilled to be working with the Saltire Society once again. Each year, another cohort of incredible women is inducted as Outstanding Women of Scotland. Through their extraordinary contributions to Scotland and the wider world they are role models for us all, and I am pleased have celebrated their achievements with them on this special occasion.”

Saltire Society President, Sally Mapstone, said:
“Across the arts, politics, science, and vital areas such as justice, special needs and mental health, Scotland generates outstanding women, whom the Saltire Society is proud to celebrate. Women’s leadership, creativity, and companionship, done on their own terms and to enhance the lives of others, characterise this year’s inspiring inductees.”

Saltire Society Programme Director, Sarah Mason, said:
“It is a great privilege to once again honour truly inspiring women who contribute to both Scotland and internationally, who change the world we live in. The Saltire Society exists to promote and celebrate Scottish culture and heritage and we are proud to work with Glasgow Women’s Library on the Outstanding Women of Scotland. Over the years, the contribution of Scotland’s women to the cultural life of this country has been truly remarkable but sadly too often underestimated or overlooked. By building the Outstanding Women of Scotland community year by year, I hope we can begin to address that shortcoming and bring women to the forefront.”