Congratulations to Denise Mina who won the Bloody Scotland McIlvanney Prize Scottish Crime Book of the Year 2017 for The Long Drop.

It is the first time a woman has won the award.

The award was announced last night (Friday 8 September 2017) at the opening night of Bloody Scotland – Scotland’s international Crime Writing Festival – which runs from 8-10 September 2017 at venues in Stirling. 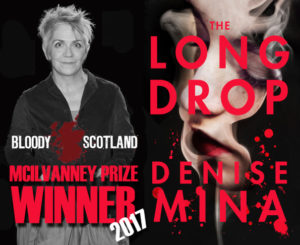 “The Long Drop by Denise Mina transports us back to dark, grimy Glasgow, telling the social history of a particular strata of society via the grubby, smokey pubs favoured by crooks and chancers. She takes us into the courtroom, as well, where Manuel acted as his own lawyer, and where hoards of women flocked daily, to watch the drama play out.

Full of astute psychological observations, this novel’s not only about what happened in the 1950s, but about storytelling itself. It shows how legends grow wings, and how memories shape-shift and mark us.